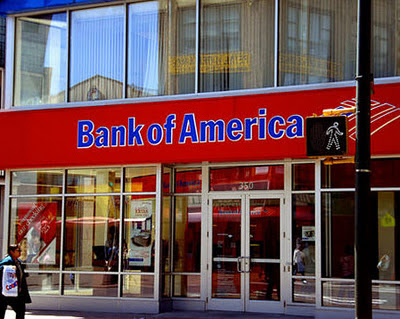 A month ago the largest retail bank in the nation, Bank of America, was planning on adding a $5 monthly fee for debit card purchases. As a current customer of Bank of America, I was not at all pleased to hear this. Yes, its only $5, but for a recent college graduate like myself, every dollar counts. Molly Katchpole, a 22-year-old nanny from Washington, felt similarly. "When I heard about the fee, it was the last straw for me," said Molly Katchpole. Immediately after, she started an online petition urging Bank of America to drop the fees. The petition had collected more than 300,000 signatures, and I must say, “Well done Molly.” With all that is going on down on Wall Street, I find it quite refreshing to finally see Americans really focus on a task at hand and stand up for themselves.

Another individual, Kristen Christian, 27, has started another grass-roots effort, “Bank Transfer Day.” This month long campaign was started to encourage customers of big banks to move their money to community banks and credit unions. For most, the scrapping of the $5 fee is still not enough. The campaign will end this Saturday. Having previously worked for a credit union, I know first hand that they offer better interest and lower fees to members. According to the head of the Credit Union National Association, Bill Cheney, credit unions have seen a huge rise in the demand for accounts up to tens of thousands. Although in the short term, this may be a solution for consumers, this is not a solution that will resolve capitalistic bank practices over night.

Do I really think that because they lost this time around, they aren’t going to come up with other ways to make up the money? No. How else can we be taken advantage of? Requiring higher balances? Direct Deposits? Hidden fees? Well, in my opinion, probably all of the above. It may not be as obvious as slapping a $5 dollar fee on your account, but slowly and surely, they are going to bring those revenues back. It is apparent that their loyalty is not being valued, and its time to stop allowing banks to take advantage of us.

As of Tuesday November 1, Bank of America has abandoned their plan to charge customers $5 to use their debit cards for purchases. For many customers, this was the final straw. Once rivals JPMorgan Chase & Co. and Wells Fargo & Co. announced that they were dropping plans for similar fees, Bank of America followed suit shortly after. Bank of America's co-Chief Operating Officer David Darnell stated on Tuesday, "Our customers' voices are most important to us. As a result, we are not currently charging the fee and will not be moving forward with any additional plans to do so." Now let's be honest, it took 300,000 signatures, customers mobilizing to close accounts and take business elsewhere, and all the competition to back down before the “customers’ voices” were actually heard.

As of October 1, 2011, the Dodd-Frank Act was put into place, which limits fees banks can levy on merchants every time consumers swipe. This act was expected to cost banks anywhere up to $6.6 billion each year, which is put on top of the $5.6 billion lost on new rules restricting overdraft fees. The $5 monthly fee was created as part of an effort to raise revenue lost elsewhere. The banks can continue to blame the rise in customer fees on the new federal regulation, but in reality it's just part of their everyday business practices.