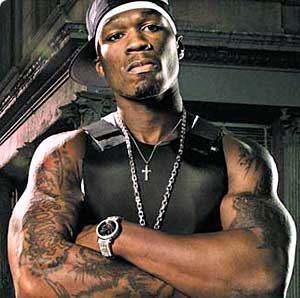 As gay rights gain momentum amongst the young, artists like 50 Cent are pulling back from anti-gay language, much like politicians adjusting their message to please their constituents.

50 Cent recently spoke out against homophobia, arguably because of the way it affects his bottom line. Seeing explicitly pro-gay pop artists rewarded with fame and dollars, it's difficult to rationalize maintaining hip hop's homophobic tradition.

Earlier this month, hip hop legend Mister Cee was arrested for having commercial sex with a transgendered woman, sparking homophobic backlash. 50 came to Mister Cee's defense and made a statement on how homophobic messages can negatively affect a music career. In reference to gay culture, he said “...if you say that [being gay is] not fine you’re gonna get attacked. You’re gonna write apology notices.” This line won’t exactly be the new slogan for gay rights, but 50’s words demonstrate something of a turnaround from many of his past utterances.

He's not alone in feeling the changing tide of opinions. Last year D.C. rapper Wale tried to pull out of performing at the a gay pride event in Washington DC, then changed course and performed following a significant amount of bad press. Meanwhile, artist Nicki Minaj has embraced the gay community, writing songs about having sex with other women and publicly supporting gay youth.

In the pop world, supporting the gay community is already the norm. Lady Gaga has become a poster child for the gay rights movement. She recently released a country version of her hit “Born This Way,” with all proceeds benefiting the Gay, Lesbian, and Straight Education Network. Ke$ha's "We R Who We R" was written in response to the recent suicides of gay teenagers and young adults. Katy Perry’s music video for “Firework” involves a kiss between two young men, and includes lyrics such as “After a hurricane comes a rainbow.”

What accounts for the new tone amongst musicians? Is the motivation for artists to speak out for gay rights a morality mission, a reflection of a changing attitude in society, or simply a realization that acceptance is good for business?

In public opinion polls, young American consumers continue to show more support for gay rights than the rest of the population. In a Gallup poll from 2010 asking if gay or lesbian relations are “morally acceptable”, 62% of men 18-49 agreed, versus only 44% of men 50+. This represents a 20% increase in support amongst men 18-49 since 2006, the largest increase in any demographic. Women 18-49 also approved more so than their older counterparts, 59% versus 43%.

The power of these young listeners empathizing with the gay rights cause may drive homophobic musicians straight out of business, and 50 Cent isn't blind to that.

Young people are the most coveted fanbase, so don't be surprised if the gay rights movement picks up some more musical supporters -- across all genres -- in the months and years to come.