Stewart and Colbert Draw Over 200,000 To "Rally to Restore Sanity" - HeadCount 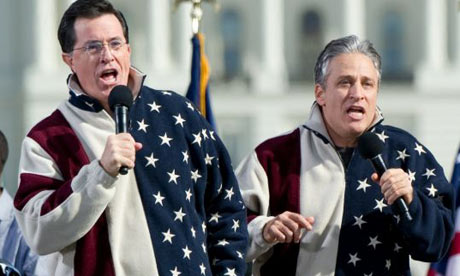 Comedy Central's Jon Stewart and Steven Colbert's "Rally to Restore Sanity and/or Fear" drew estimated crowds of 215,000 to the National Mall on Saturday, blowing away initial estimate of event organizers, who submitted a permit for only 60,000.

The Stewart/Colbert rally was so heavily attended that the Washington DC transit system set a new record for a single day's use of the city's bus and subway systems. Crowds stretched from near the Capitol Building past the Washington Monument.

One of the day's highlights was Cat Stevens (AKA "Yusef") and Ozzy Osbourne dueling "Peace Train" vs. "Crazy Train" with the O'Jays finding a happy medium with "Love Train."

Stewart's final remarks served to remind the hundreds of thousands in attendance of the purpose of the rally in the first place. Speaking more like a statesman than a comedian, Stewart informed the crowd that, "[W]e live now in hard times, not end times. And we can have animus and not be enemies. But unfortunately one of our main tools in delineating the two broke. The country's 24 hour political pundit perpetual panic conflictinator did not cause our problems. But its existence makes solving them that much harder. The press could hold its magnifying glass up to our problems, bringing them into focus, illuminating issues heretofor unseen. Or they can use that magnifying glass to light ants on fire. And then perhaps host a week of shows on the sudden, unexpected, dangerous flaming ant epidemic. If we amplify everything, we hear nothing."

Photos of the event are available at Washington, DC based blog DCist.