Inside the Shutdown: Week 2 Begins - HeadCount

HeadCount's Washington, D.C. team leader is a federal government employee currently on furlough. This is the third installment in what we hope will be a very short series. The opinions expressed are his own.

One week into this mess, and I am feeling quite conflicted. Last week the predominant emotions were anger and concern about how I will pay my bills if this continues to drag on. With the impending passage of a bill that will guarantee my colleagues and me full pay for the time we are furloughed, I am now caught between an overwhelming sense of relief that I no longer have to worry about money, mixed with sheer contempt towards the people using the federal workforce and the services we provide as political pawns in a bigger game. There is also a bit of guilt creeping in over the fact that I will be paid for hanging out and waiting.

I admit that I am not actually surprised by the political machinations of the House. I have been in federal service for a decade and am used to the games people play to get their way with things. However, I have not seen it at this scale and, in my humble opinion, it is absolutely absurd.

We were definitely surprised to hear of the back pay, as we were specifically told to expect nothing when this all began. My non-fed friends keep asking me what I am doing to stay busy during this time and are surprised to hear “not much.” At this point, I guess you can technically categorize this as a paid vacation, but it is the kind where you cannot plan anything or stray far from home due to the fact that we could be called back at any point. I should not complain about an extended paid holiday, but the added stress of not knowing what’s going to happen sucks some of the fun out! 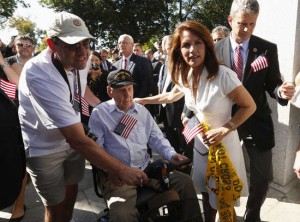 In the meantime, D.C. seems to be in chaos, with crazy things happening every day. I think it started with the veterans storming the WWII memorial shortly after the shutdown began. Keep in mind, the Park Service is part of the government and if we must categorize, they are pretty “nonessential” (I say this with no prejudice, coming from an agency which was deemed 98% nonessential). The most entertaining part of this news story was the fact that members of Congress took the opportunity to escort the memorial crashers and leave some sound bytes along the way. Check it out here and here. It is beyond words. Furthermore, pundits are now pointing out that there are more guards at the WWII memorial than there were at the U.S. compound in Benghazi last year on the night of the terrorist attack. I feel that is a bit of stretch in terms of comparisons (I also feel the Benghazi guards were probably a bit more armed than a uniformed park ranger).

Later in the week we had a high speed car chase from the White House to the Capitol which ended with an unarmed woman being shot while her baby sat in the back seat. We also saw an unknown man perform an act of self immolation in the center of the National Mall. He has since died. Neither of these episodes are known to be linked to the shutdown in any way, but they definitely add to the overall unease of a city falling apart and losing its direction.

As we begin a second week of inaction, I wait uneasily for what this week may hold for us. The news has become repetitive and uninformative. As people use my job as collateral in a bigger battle, I can only sit and wait for what will come next. Some agencies have been able to call their employees back to work. Unfortunately, there are still over 500,000 people waiting to see how this will all pan out.