Lockn’ is for Lovers - HeadCount

When the promoters of Lockn’ asked HeadCount to organize the entire non-profit area at the festival, we were pretty excited to host fellow NPOs and test out some new ideas. But we had no idea how much fun it would be. We called it “Participation Row,” and brought in a sponsor, Qello, to help pull it off.

By the time it was all done, we helped generate 5,752 separate actions and generated $49,800 to be split among the 16 non-profits in attendance. How? Well, it helped that Bob Weir, Trey Anastasio, Widespread Panic and almost every performer at the festival signed some guitars. We raffled one off for free – attendees just had take action at four non-profits to enter the drawing. Anyone who entered the drawing also got a free 30-day subscription to Qello. Then to raise some dough, we auctioned a couple of guitars and signed posters to the highest bidders. Each non-profit will get an equal cut.

The other way we pulled it off is with awesome volunteers. Here is the account of Lockn’ written by two of our amazing team members.
Our adventure began with the surreal experience of arriving 3 days early for the first annual Lockn’ Music Festival on Oak Ridge Farm in Arrington, VA. We watched the festival being built from the ground up, against a backdrop of breathtaking mountain views. Exploring the farm, watching the sunset behind the stages, and setting up the Qello Lounge and HeadCount booth eased us into festival life. But Thursday came quickly, and cars began lining up, signaling the start of Lockn’. We were doing more than just our usual HeadCount work (registering voters, #SoundingOff). This time, we were running Participation Row, a collective of national and local non-profit organizations. With the largest HeadCount team to ever work a festival, we got down to business registering, pledging and driving participation in the non-profits' work. Qello, our Participation Row sponsor, provided us not only with some awesome tunes for the weekend, but also cool new friends. Festival-goers loved learning about the different non-profits and being rewarded with a chance to win a beautiful guitar signed by just about everyone playing the festival - Bob Weir, Trey Anastasio, Zac Brown, Widespread Panic, Grace Potter, Jimmy Cliff, to name just a few. We canvassed hard throughout the festival grounds all weekend, making sure that everyone had the opportunity to register to vote. I took the opportunity to ask every Virginian I could why “Virginia is for Lovers” and got some very interesting answers. The best answer I received? Virginia is so spectacular that it encompasses mountain lovers, beach lovers, forest lovers — the list goes on. The same could be said about Lockn’, which, like its host state, offered a thousand things to love.

The short list? In no particular order: The food vendors at Lockn’ were a pleasant change from the usual festival fare of quesadillas and fried dough. Here, those staples were exchanged for shark tacos and Australian pies. Our personal favorite, gypsy juice — tea-infused lemonades — was key to surviving the hot Virginia days. 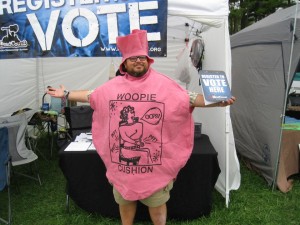 Next on the list would have to come the combination of golf cart rides, Team Leader JR Wotring's woopie cushion costume, and ridiculously fun HeadCount team shenanigans, making up their own category of things to love.

But, above all, we lived for the music and the good work we were doing. When the sun went down, we were treated to amazing collaborative ("interlocking") sets from Grace Potter and Warren Haynes, Widespread Panic and John Fogerty, and Trey Anastasio and Furthur. Sets for the history books.

Our silent auction, with proceeds to be divided among the non-profits in Participation Row, offered up a gorgeous Epiphone guitar, signed by most of the Lockn’ artists, as well as a signed poster. The turnout for the auction was incredible, leading to a nail-biting popcorn bid auction to determine a winner. Festival-goers were so fired up, at the end of the day, the auction had raised almost $50,000 for all of the non-profits who poured their hard work into Lockn’. On top of that, festival-goers took 5,752 actions at Participation Row booths, 183 voters were registered, more than 450 pledged to vote. Not to mention the 1,500 lbs. of food collected and $10,000 donated to Conscious Alliance and the Nelson County Pantry. All in all, a beautiful weekend, where HeadCount, Qello, and Lockn' made a real difference in the world — and once-in-a-lifetime musical history. That's what I'd call true harmony.