Black-tie Bonnaroo. That’s what the inauguration of Barack Obama became as musicians descended on Washington, DC to play fancy private gigs and pay homage to the new president. In two short days, I managed to catch The Dead, Jay-Z, Kanye West and Kid Rock. And that was just a smidgen of the musicians who came together to lay down a live soundtrack to history.

Much was written about the wide array of musical performances at the Democratic National Convention in Denver last summer. In many ways, that was similar to the Super Bowl or any big-time corporate event, A-list talent is lined up to play private parties and cash hefty paychecks to do it. The official Convention Balls were a different story. The artists actually paid their own way and expenses, which is absolutely unheard of in music today. When presented with the chance to be part of history, the artists gave their accountants the night off (or a coronary) and dug into their own pockets just to play.

By the time I got to DC on Monday the 19th, I’d already missed a lot. On Friday, Warren Haynes played a private show for the Obama transition team. On Saturday, Haynes and Phil Lesh joined Jackie Greene on stage at The Dead’s new hangout, The Old Ebbitt Grill (it’s also where Phil and Bob Weir watched the returns on election night). 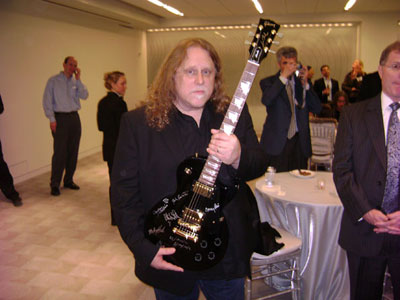 My first destination was a cocktail party at the Washington law firm that is the center of The Dead’s strong and growing presence inside the Beltway. Without revealing too much, let’s just say there is a cadre of Deadheads in high places in DC. They all know each other, many have known the band members for years, and many more have gotten to know the band members in the wake of the Dead’s embrace of electoral politics. HeadCount hosted a party for many of these folks last April, where Bob Weir led an acoustic sing-along of “Ripple” to 200 people in suits. Since then, the music never stopped. The Dead are as at home in DC as they are in San Francisco.

This particular cocktail party represented that as much as any show. Phil, Bobby, Mickey and Warren were all on hand. I had the pleasure of chatting with Bob and FCC Commissioner Jonathan Addlestein (one of the bigger Deadheads in DC) for some time. The guys also signed a Gibson guitar that was donated to HeadCount, as did Speaker of the House Nancy Pelosi and former White House chief of staff John Podesta (it will be auctioned as a fundraiser, check http://www.HeadCount.org for details). 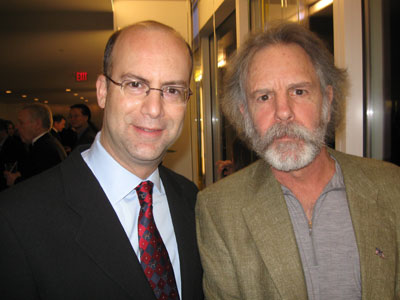 It was a pleasantly sedate affair, and a rare chance to spend quality time with these icons. I then headed to a completely different world – Jay-Z at the Warner Theater. While it was a public, ticketed concert, this sold-out show still had the air of a private party for insiders. A good chunk of the audience was decked out in tuxedos, coming from, or on their way to, one of dozens of events spotting the city. When Jay-Z took the stage just after 9:30, the entire crowd came to its feet and never sat down again. He swooned how thrilled he was to be there celebrating Barack Obama’s inauguration, and how he hoped everyone brought a snack because he was going to play for three or four hours.

He didn’t – the show lasted less than two – but everything else he said rang with truth that could only come from the heart. The stage show featured a live band, backup vocalists and a large video screen. Straight from the amphitheater circuit, it was probably one of the most expensive and dramatic productions the Warner Theater had ever hosted. Guest appearances by Mary J. Blige and Beyonce brought the house down, as did “99 Problems” (it was almost as good as the version from Coney Island in ’04). But the highlight and emotional center of the show was undoubtedly Jay-Z’s direct ode to the incoming President. With newspaper headlines from Obama’s victory in November streaming past on the video screen, he sang “My President is Black” to wild cheers from the multi-racial audience. If anyone had forgotten for a second what brought everyone to DC that week, Jay-Z reminded them with a profound strike to the soul that only music can deliver.

When the big day came on the 20th, there was just one true rock star in Washington, DC. A crowd 15 times the size of Bonnaroo, and three times that of Woodstock, stuffed onto the Mall to see the 44th president sworn in. Hours later, the official celebration began with party after party and 10 “Official Inaugural Balls.”

I was lucky enough to have tickets to two of them (yes, I had two Balls). First came the “Youth Ball,” an event put together by the Presidential Inaugural Committee to honor the unique roll that young people and young voters played in President Barack Obama’s election. HeadCount, a strictly nonpartisan organization, was one of many nonpartisan youth voter groups that were honored with an invitation to this first-time event, in the basement ballroom of the Washington Hilton.

Kid Rock played a very enjoyable acoustic set, with a rendition of “Sweet Home Alabama” that brought a Republican perspective to the festivities (“Watergate does not bother me; does your conscience bother you?”) but still drew cheers from every line. Kanye West followed, and I can report that he was on time. I guess he was on a much stricter schedule than at Bonnaroo, as the entire show was timed around the appearance, shortly after 10 PM, of the President and First Lady.

As soon as he appeared on stage, friends watching at home on MTV began texting me madly. This is how I know the President made an appearance, as I was already on a mad dash to the Mid-Atlantic Ball to see The Dead!

Ever see a guy running down the street in a tux trying to catch a Dead show? Well that was me. The DC Convention Center was host to several balls, and tens of thousands of similarly dressed politicos. I raced through the lobby, made a couple of turns and then, in a moment I cannot begin to truly describe, heard the sounds of The Dead wafting through these unfamiliar environs. Then, there was the site of well over 5,000 crowded around the stage.

Bobby, Phil, Mickey, Billy and Warren were sporting tuxes as well, and sounded wonderful, even with the horrible convention hall acoustics. The Obama logo sat in a Steal your Face on Mickey’s drum kit. He and Billy drove “Touch of Grey” (Obama’s favorite Dead song) up to the rafters, pushing and pushing as only the Dead’s percussionists can do. It set up a “Box of Rain” closer that brought every Deadhead in the room together and surely entertained the uninitiated.

The Dead at a black-tie political affair may strike some as a square peg. But to anyone who has really paid attention the last few years, it is a fine expression of who these men have become and how their passions intertwine. Shared convictions are what brought Phil and Bobby together in this stage of their lives. They have embraced Washington, and Washington has long-embraced them.

In this and many other ways, The Dead sit at the spiritual center of the HeadCount organization. Our nonpartisan message that all music fans should be active participants in Democracy, and that together we truly can make a difference – The Dead and the Deadhead community capture this message in a way that can’t be reduced to tangible specifics. It’s about a way of life and a way of seeing the world, and how the world is what we make of it.

That particular idea, that “It’s what we make of it,” is one that resonated for me throughout my trip to Washington. There are great challenges in this world. And there is great promise. During his inauguration, President Obama called on Americans to accept “a new era of responsibility.” To me, this very much captures the new direction of HeadCount. Our work does not end at the polls. Regardless of who we voted for, it is up to all of us to fight for what we believe in, and be a part of reshaping America. 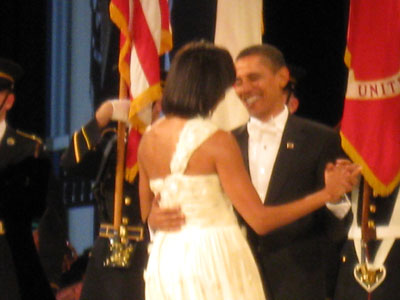 The President and the First lady, shot from the crowd following The Dead's performance

This theme was delivered one last time that night, by the honored guest himself. Shortly after the Dead left the stage, the President and the First Lady greeted the Mid-Atlantic Ball. He thanked the crowd, and gave a very short address declaring that it’s up to all of us to tackle the challenges facing America and be part of the solutions. The color guard band that welcomed them on stage then took out their instruments and played a waltz for Barack and Michelle Obama, who danced with a grace befitting of the first couple. The soundtrack to history was complete.